LAROS TechnologiesNews & Upcoming EventsWindows & DoorsLow-emissivity (low-e) window coatings: how they work and when to use them

Low-emissivity coatings are common place in high performance window assemblies, and the benefits to including them are quite large. When justifying the additional cost, it is natural to ask how exactly this invisible coating is going to help save energy and increase comfort, and what are the key factors to be aware of when choosing them. Answers to these questions can often be vague and involve nearly every technical parameter supplied with the window. This post attempts to answer these questions in an understandable and accurate way, with all misconceptions avoided. As such it’s a little bit long but hopefully clearer because of it.

How heat gets through a window

To understand the benefits of using low emissivity coatings it is important to first understand the ways in which thermal energy can pass through a window. In general, these are the same ways heat travels through anything: (1) conduction (vibrating atoms and molecules), (2) convection (transport of warm gases/liquids) and (3) radiation (energy carried by electromagnetic waves, such as visible light and infrared). Although each of these are distinct processes, from a practical perspective they are often interconnected and hard to separate. For example, radiation from the sun will heat up a pane of glass which will then conduct heat through it and cause convective air currents on both sides of the glass pane to form. To overcome these complexities, when Engineers need to find the thermal energy flow through a window, they use the following equation:

Here Q is the total heat energy in Watts (W) that passes through the window, U is the U-value that measures how easily heat will be transmitted through the window (W/m­2°C) (so the lower the U-value the better), A is the window area (m2), (T­out – T­in) is the temperature difference between outside and inside, SHGC is the solar heat gain coefficient which measures the fraction of energy from the sun that is transmitted through the window  (a percentage) and Et is the total energy from the sun that reaches the window (W/m2). The above is ignoring a final term in the sum to account for any air which leaks through the window, but for the most part in the newly installed high-performance windows considered here, can be assumed to be very small and hence ignored. This method is a simplification because the parameters U and SHGC are values obtained either from experiments or simulations on the windows and they already account for all three heat transfer mechanisms although separated out into their respective sources. Here, the U-value term accounts for the energy flow due to the inside and outside trying to come into thermal equilibrium with each other. And, the SHGC term accounts for energy due to direct, reflected and diffuse radiation that originates from the sun. These are the main technical parameters that describe any windows performance. That each term in the energy sum is influenced by multiple transfer mechanisms is important to recognise.  Although low emissivity coatings only influence radiative heat transfer, they impact both the measured U-value and SHGC of a window. 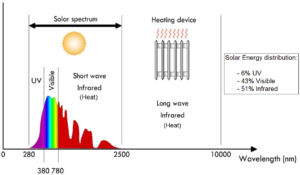 In terms of radiation, what we humans experience as heat is mostly carried by the infrared part of the electromagnetic spectrum. The wavelength of radiation emitted from any substance depends on it’s temperature. For something incredibly hot like the sun this has a shorter wavelength than something earthbound like a heater or human body. But, in either case we feel this radiation as heat (especially if it is infrared) and it can provide thermal energy to the things it lands on. In the Figure above, the solar spectrum is shown relative to the infrared range of everyday objects such as a heater. Here it can also be seen that most of the total energy given out by the sun arrives in the form of short wave infrared heat.

When some infrared radiation strikes a window pane, there are three things that can happen. It can be reflected, it can be transmitted through the glass, and it can be absorbed by the glass. Most of the time, all three happen to varying amounts simultaneously. In the case it is absorbed, it causes the window pane to heat up. Eventually, as it reaches thermal equilibrium with it’s environment, the pane will emit this same wavelength radiation. There is in fact a physical law describing this (Kirchhoff’s law), that states that if something is a good absorber at a certain wavelength and temperature then it is also a good emitter and vice versa. Regular untreated glass is a good absorber of long wave infrared given off by everyday things but allows shorter wave radiation from the sun to be transmitted and pass through. This effect is how a greenhouse works; the suns radiation shines through the glass roof and heats the soil and plants. These never quite reach the temperature of the sun, but instead radiate out a longer wavelength infrared. Most of this radiation is then absorbed by the glass as it makes its way back out. To the long wave infrared, the glass appears opaque. Importantly, the glass then also emits this same radiation back towards the ground as well as to the outside. The internally radiating side keeps the inside of the greenhouse at a higher temperature than the outside environment.

This greenhouse effect that regular glass provides has a flaw though. Or at least an inefficiency in terms of keeping the inside warm. That is that the glass emits the absorbed energy both to the outside and to the inside. This is where low emissivity coatings come in.

As their name suggests these coatings do not emit very well. Specifically, low-e coatings hardly emit (and therefore hardly absorb) long wave infrared at all. But they are transparent to shorter wavelengths and visible light. This is achieved by using materials which are highly reflective to infrared radiation, such as nanometre thin metallic films or other metal-based compounds. A window pane with a low-e coating on one side then does not emit the radiation generated by an objects temperature from one side to the other. It is like a beefed-up version of the regular greenhouse effect, where the radiation absorbed by the glass only gets emitted in one direction. This would keep your plants (or your house) much warmer than regular glass. It is through this prevention of radiative heat transfer that low-e coatings lower the U-values of windows. This is especially true in double and triple glazed assemblies, where conductive and convective heat transfer is already minimised due to the presence of an insulation cavity. 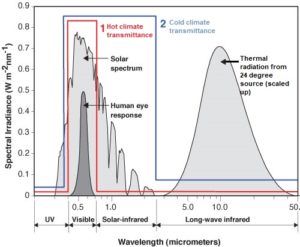 Having explained how the low-e coatings can improve the U-value of windows (namely by preventing radiative heat transfer) it is now time to bring the solar heat gain coefficient into the picture. The SHGC is essentially a measure of how much of the suns energy is rejected from entering the window assembly and does not make it’s way inside. Because low-e coatings reflect infrared radiation, any low-e coating will lower the SHGC of a window. However, the amount to which this occurs can be fine-tuned by the manufacturer by changing the coating makeup. In a hot climate where annual cooling loads are the biggest concern, the lower the SHGC the better. For cold climates the opposite is true, where having a high SHGC can offset some of the heat loss through the window. Control over the SHGC comes about by formulating the low-e coating to reflect either more or less of the short wave solar radiation. This is shown in the figure above where the ideal hot climate transmittance is much narrower than the cold climate. Occasionally coatings designed to reflect more of the suns radiation are referred to as solar control coatings, but in general they are still classified as low-e. 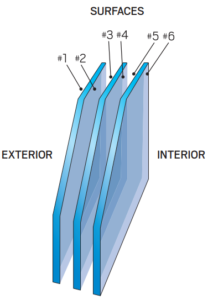 When selecting low-e coatings for windows the most important consideration is the SHGC. This is because it is always better from a thermal performance perspective to minimise the U-value, but the amount of optimal heating from the sun depends on the local climate and window orientation.

For double-glazed assemblies putting the low-e coating on surface #2 or #3 (see the above figure for standard numbering scheme) will depend on whether you want better hot climate or cold climate performance. A #2 coating will prevent the most external heat from being emitted into the window assembly and so is best for hot climates. In the reverse, a #3 coating will be best at preventing internally radiated heat from being absorbed by the window and emitted outwards, and so is best in cold climates. This coating placement should be considered with the SHGC value supplied by the manufacturer, with lower SHGC chosen for the hot climate. In cold climates, high SHGC values should be chosen with care, and potentially with further analysis of individual window orientations or external shading. If a high SHGC window is in a position where eaves are not large enough to shade the summer sun, then what is a welcome source of heat in the winter can quickly become an inescapable heat load in summer.

Using two low-e coatings in a double-glazed assembly is generally unnecessary, unless very high performance is desired. A standard low-e coating might have an emissivity rating of about 0.05. This implies it reflects 95% of infrared that is incident on it. On it’s own this is already drastically reducing the amount of radiative heat transfer through the cavity. Adding another coating could take this to about 99.75% reflection, which is only a few percent better performance but a doubling of the cost associated with the low-e coating. An exception to this is where a very low SHGC coating could be applied to surface #2 in addition to a purely thermal coating on surface #3 to create a very high-performance unit for hot climates.

For triple-glazed units, two low-e coatings are the standard, as these reduce radiative heat transfer through both insulation cavities and hence optimise the assemblies total U-value. Using additional coatings suffers the same kind of performance cost-trade off that was discussed for the double-glazed unit. The position of the standard two coatings can vary, where #2 and #4 might be used for hot climates and #3 and #5 for cold. A good all-round approach is to coat surface #2 and #5 as this way the emission through the assembly is kept low from either direction.

Another consideration is the visible light transmittance or VLT value. This is the percentage of the visible spectrum that the window transmits through it. A standard single pane of uncoated glass has a VLT of about 86-90%. Lower VLT values might mean a slight discolouration or dimming of light through it, but this is a lot less noticeable if the same VLT value coatings are chosen for all the windows in any single room or house, so as to prevent direct comparison.

The final parameter worth mentioning that might play a role in choosing a low-e coating is the manufactured type of coating. The two main choices here are hard and soft coatings. Hard coatings are applied to the glass either early on in the manufacturing process while the glass is still hot (so that the coating gets welded to the surface) or via chemical vapour deposition (CVD), where a catalyst is used to generate a tough, bonded metallic film. These coatings are resistant to handling but tend to have lower VLT values and do not perform as well as the soft coat. Soft low-e coatings are generally applied after a glass pane has been fully hardened. Here, a sputtering process is used whereby under a vacuum metal is evaporated and deposited directly onto the pane. Due to the particulate size and surface finish of this coating type it achieves the best VLT and U-values. However, it must be used in double or triple pane units to avoid any damage to it’s surface.